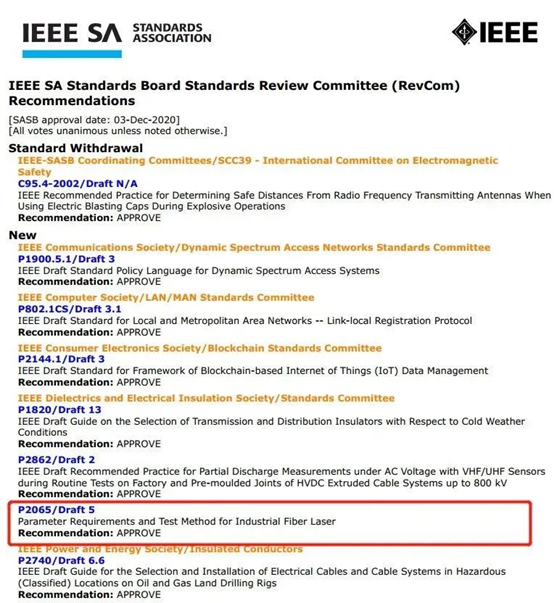 The National Laser Processing Industry Technology Innovation Strategic Alliance aims to gather rich innovation resources, realize industry-university-research cooperation, jointly explore the prospects of laser applications, and promote the rapid development of the laser industry. The preparatory work for the formulation of this international standard was officially launched in 2016. It was initiated by the industry alliance and gathered high-quality enterprises and universities such as Raycus, HGTECH, Huazhong University of Science and Technology, Beijing University of Technology, Zhejiang University of Technology, etc. In 2018, it was approved by the International Institute of Electrical and Electronic Engineers, and then formulated in strict accordance with the IEEE process. After two years of hard work, it has officially become a mainstream standard recognized by the international world.

It is understood that the International Institute of Electrical and Electronics Engineers is a technical organization with greater influence in the world. Its standards association has organized a series of international standards for wireless communications and smart grids. It is a global leader in the number of standards adopted and frequency of use.

This standard is about the definition of the main parameters of fiber lasers and the detection methods. Lasers are the core components of laser equipment. Fiber lasers are currently the industrial lasers with the largest market share and are the mainstream products in the market. In the past, my country's fiber lasers were totally dependent on imports, but as a group of outstanding laser companies continue to increase technological innovation and research and development, they gradually realized their localization and even export overseas. The birth of my country's first international standard for laser products means that my country's technical strength in this category has been internationally recognized, and it also reflects the high manufacturing level of domestic fiber lasers.

Dr.Yan Dapeng, the vice chairman and chief engineer of Raycus, believes that China has set international standards for laser products for the first time, reflecting the high manufacturing level of domestic fiber lasers. Next, Raycus will continue to participate in the formulation of more related test methods and technical specifications to further improve the development of the laser industry. On the one hand, it can not only enhance Raycus domestic and even global influence; on the other hand, through the formulation of industry standards, it will drive the development and upgrade of the entire industrial chain.

PREV：Raycus Gratitude Visit | How big is the laser cleaning market in the future?